Source: ABC4, By Courtney Johns, 1 in 3 utah homes found to have unsafe levels of radon

Anjee Chynoweth is a nurse. She’s never smoked. She runs and eats healthy. That’s why she said she was shocked to learn she had lung cancer.

“I was obviously just asking my doctors, a surgical oncologist, why on earth do they think that I have lung cancer,” said Chynoweth.

The doctors told her it was likely radon.

“I said I’ve never been around radon. You know, I thought it was something that you encountered in the workplace or something,” said Chynoweth.

Utah Radon Coordinator Eleanor Divver said radon is the number one cause of lung cancer death for non-smokers. Divver says radon is released into the air when uranium breaks down. Uranium can be found naturally in our soil and rock deposits. You can’t see or smell it, but you can test for it and it costs as little as 10 dollars.

When Anjee’s family tested their home for radon they found high levels of the toxin. According to the Utah Department of Environmental Quality, of the homes tested for radon, one out of every three come back with dangerous levels of the gas in Utah.

“I was just devastated because my girls all live, you know, live here and live in the basement,” said Anjee.

Below is a map from the EPA that shows areas that are more likely to have high levels of radon. Yellow is low potential. Orange is moderate. Red is the highest risk of having dangerous levels of radon. 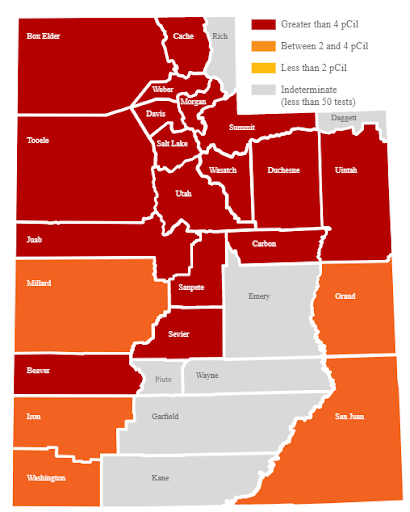 Source: ABC4, By Courtney Johns, 1 in 3 utah homes found to have unsafe levels of radon