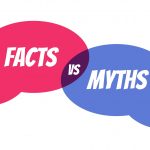 Myths about Radon – Which of the following statements is true?

If you guessed any of the above as being true, you have bought into a myth. That’s right, all 4 of these statements are myths. Myths are tightly woven into the fabric of our human existence. Scientists believe myths are created by mostly well-meaning, but uninformed, individuals or groups who vocalize an observation or belief without the data or proof to back it up. Because we tend to trust our family and friends who spread these myths, we tend to adopt them into our beliefs and even help spread them.

Try as we may, there’s no getting around the fact that myths are just a part of our lives and while most are harmless, some have serious consequences if followed. For example, have you ever heard the old aphorism: “starve a fever, feed a cold”? You guessed it, it’s a myth. Restricting calories when you have a fever is actually the exact opposite of what the body needs to regain health. Similarly, there are a whole host of myths about radon that if believed, can lead to some scary outcomes.

So, in an effort to debunk harmful myths, here are the 10 most common myths about radon and why they are false:

While opening windows will help reduce radon levels temporarily, it will not solve the problem. Typically within 12 hours of closing the windows, the radon level will be back to where it was before the windows were opened. So unless you live in an area where you can leave your windows open 24/7, this is not an effective solution.

A home with a radon level of 4.0 pCi/L has the equivalent lung cancer risk of smoking a half pack of cigarettes a day and ⅔ of radon-induced lung cancer deaths come from homes that have radon levels under 4.0 pCi/L. The EPA also recommends considering mitigation at 2.0 pCi/L. Just like there is no safe number of cigarettes to smoke, there is no “safe” level of radon. The goal of mitigation is to get the levels as low as possible.

Radon gas will come through a home’s foundation regardless if there are cracks or not. Sealing cracks will not impact the amount of radon entering the home; however, once a radon mitigation system is installed, sealing the cracks will increase the effectiveness of the system.

Radon comes from the natural decay of uranium in the ground. No matter what type of foundation your home rests on (unless you live in a tree house), it will have direct contact with the ground and will be exposed to radon. Air pressure below a home tends to be higher than the air pressure inside a home which means radon gas is naturally drawn into the home. Radon mitigation systems are designed to reduce this pressure difference and expel the radon gas to the outside air.

The average cost to mitigate a home is between $1500-1650. Considering it is a one-time expense that will significantly reduce your and your family’s risk of getting lung cancer, it is worth the investment.

Regarding testing, we offer all Utah residents 1 free radon test kit. We pay for the kit, the shipping, and the lab fees – there’s no catch. Our #1 goal is to reduce the number of unnecessary radon-induced lung cancer deaths in Utah so we are removing the barriers for all residents to get their homes tested.

In almost all cases, having a radon mitigation system will actually increase the value of your home. Potential buyers want to know they are investing in a home that is safe and free from harmful substances. That is why most realtors will strongly recommend having the home tested for radon, mold, and methamphetamine. It’s one less thing a potential buyer needs to worry about if you already have a radon mitigation system installed.

Because radon is a naturally occurring radioactive gas (there’s no big company to blame for it), the responsibility of educating the general population falls largely to the government. Government funding is usually a challenge which means radon awareness isn’t anywhere near where it needs to be; however, there is a significant number of government, medical, and community organizations that are making strides to raise public awareness. Below are just a few of them:

It’s important to understand that all of these organizations (and many others) have found that radon is the #1 cause of lung cancer among nonsmokers. It is completely preventable by simply testing your home and then having a radon mitigation system installed if your home has unsafe levels.

Radon is a radioactive gas and requires special training to properly mitigate. Only hire a company that is certified by the American Association of Radon Scientists and Technologists (AARST – the national governing body of radon testing and mitigation). Also, check the company’s reviews before hiring them. Many companies try to win business by offering the lowest price. As is the case with most things, you get what you pay for.

Ask anyone who has had to undergo radiation treatment for cancer and you’ll know how harmful it is. Radon causes ionizing radiation which simply means that harmful ions come in direct contact with your lungs which can result in lung cancer. For example, if your home has a radon level of 4.0 pCi/L, you are receiving the equivalent of 200 chest x-rays per year without even knowing it.

Radon gas comes from the natural decay of uranium in the ground. Where there is more uranium, there will be more radon gas. Some people believe that radon is only high near the mountains or in areas where mines once were. This is not true. The key factor that determines how much radon gas can enter a home is how much uranium is in the ground beneath your home’s foundation. We frequently see neighbors who test their homes who find they have vastly different radon levels. This makes perfect sense because it simply means the house where one house sits has more uranium than the one next door. This is why it is so important to test for radon.

Myths about Radon. While some myths can be harmless and even fun to spread (if you still believe that touching a toad will give you warts…that’s okay), when it comes to radon, it’s critical to know the facts.

Should I Buy a Home With a Mitigation System?

Mitigation System? Shopping for a home comes with endless questions. Is this neighborhood walkable? Will…

Radon Risk Across Utah: What You Need To Know

Utah is home to towering mountains, stunning lakes and rivers, and, unfortunately, high levels of…

Cause of High Radon Levels - Radon is an odorless, invisible, radioactive gas that rises…