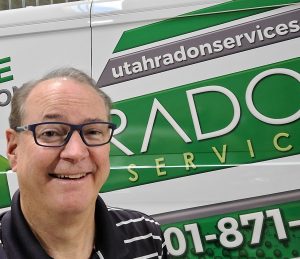 First off, no I am not a radon mitigation installer, I am the marketing guy at Utah Radon Services. I was invited to my first radon installation at a home in West Jordan that was for sale. We provided a free radon test to one of our real estate partners on a home he had for sale.

The radon test came back for that home at 11.7 pCi/L and since that level would create the same risk for lung cancer that is equal to smoking more than a pack of cigarettes a day, it’s a good thing they were getting this taken care of before the home sold. The EPA recommends that homes over 4.0 pCi/L get mitigation, so getting this radon system would help the home sell quicker and it would be safer for the new buyers.

I arrived at the home at 7 am and met our installation crew. The first thing the crew did was to put down carpet runners (floor coverings) and made sure that they wouldn’t track any dirt or snow from the outside.

The realtor guessed the best way to install the radon system would be in a closet on the east end of the basement. Our installer noticed that the closet was facing the fireplace and drilled a test hole and found out that the fireplace would block our access to do an exterior radon system.

The installation crew contacted the realtor and told him that we would need to install the system in another closet across from the room and go out through to the garage and install an interior system.  The realtor agreed to the new location and plan.

The crew checked the new area with another drill test and found a good location that would hide the system, and give easy access to the garage. 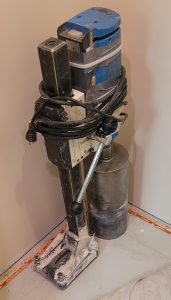 Our crews use commercial core drilling equipment so we can cut a clean access hole down through the concrete floor for the new radon system without creating any dust. I then watched the crew proceeded to cut into the foundation and cut a perfect circle. I was amazed at how little dust the core drill machine made with the water lubrication system and vacuum attached and how easy it cut through the concrete floor.

Once they reached dirt, they had to hand dig and pull the dirt out. 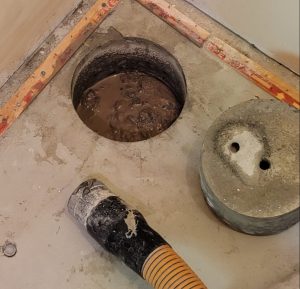 Unfortunately for our crew, this ground was full of clay and made it more difficult to remove the dirt. I asked how much they had to dig and they said they needed to fill three 5- gallon buckets.

Even though this is a lot of work, I learned most radon companies don’t take out this much.  We have found that it is well worth the extra work and produces the best performing radon systems with the lowest levels of radon after the installation is completed.

Our brave installer went onto the icy roof and installed a 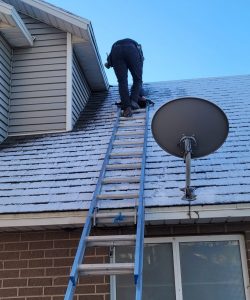 black exhaust pipe and pipe flashing that blended in with the rest of the pipes on the roof. I did my part by holding the ladder in 22-degree weather. I could tell, this was not the first icy roof he has been on.

While this was going on, one of the installers was still digging and pulling out dirt from the 6” hole. 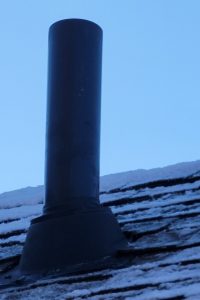 He used a long crowbar, small hovel, his hands, and was able to fill the three buckets. 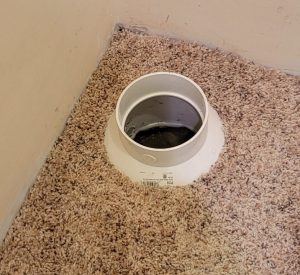 They installed a Manometer and the fan alarm on the PVC pipe in the garage. 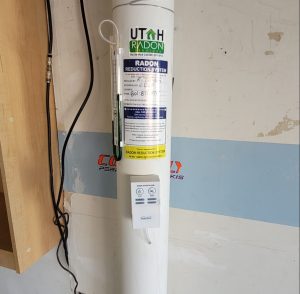 The fan alarm would alert the homeowner if the fan stopped working for any reason.

Inside the closet, before the pipes were connected, I could hear the radon fan and it was really loud.

I put my hand on the pipe and could feel the fan sucking air through the pipe. As soon as they connected the pipe, the sound went away and I was amazed at how quiet it was.

The installers reinstalled the carpet in the areas they had to pull back, cleaned the area, and you wouldn’t know they were even there. The whole installation took about two hours and I was surprised how quickly and efficiently the installers worked. 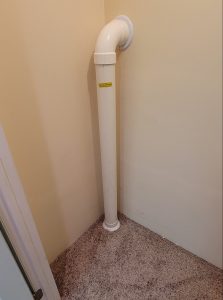 If you were worried that having a radon mitigation system installed in your home would be this major construction project, don’t be. A radon system is a lot quicker than installing a furnace or an air conditioner and most radon systems are installed within a few hours with the right crew doing the work.

Get a FREE radon test or radon removal bid

Back to top
COVID-19: Radon testing and mitigation services have been named ESSENTIAL SERVICES in Utah and we are continuing to provide these services while following CDC guidelines. Call us with any questions or concerns.
X